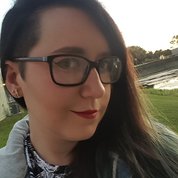 I am a current Palaeobiology student, with an interest in biomechanics, evolution and mass extinctions - and of course, dinosaurs. I've volunteered through RockWatch on several Geology festival days, worked in conservation of minerals with UCL and worked in the field on dig sites in Montana. I know many people have an interest in dinosaurs, especially kids, and I want to encourage that passion and spread awareness on Palaeontology as a career.

I have worked with children and parents during Geology Festivals, giving interactive and hands on education on fossils, as well as working in the field on excavation, preservation and cleaning of fossils through the PaleoX program in Montana.