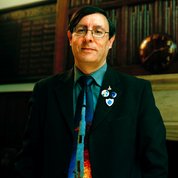 Jerry Stone is a freelance presenter on astronomy and space exploration. He gave his first space talk at school back in 1969 when he was 14, and now he does this for a living, all over the UK and abroad. He also presents space workshops in schools across the UK, inspiring pupils with a range of space activities. He is often interviewed on TV and radio, and is the author of a book about the Moon landings -"One Small Step". He is described as "One of the leading speakers on space exploration".

Jerry Stone has spoken on space exploration at many venues, including: The British Festival of Space The Edinburgh Festival The Farnborough Air Show The Mars Society Conferences in the UK, Belgium, France, The Netherlands and the USA Oxford University The Palace of Westminster The Royal Institution The Royal Observatory, Greenwich The World Science Fiction Convention He was also interviewed for Blue Peter about how rockets work!

I give presentations on astronomy and space exploration all over the UK. I also present space workshops for schools across the UK, at both primary and secondary level. They include Space Is Big, Mission To Mars, The Great British Blast-Off, and Build The Space Station. Now we are planning to return to the Moon - a perfect opportunity to excite and inspire students with STEM activities. Contact me for more information. I also run team-building exercises for companies and other organisations.